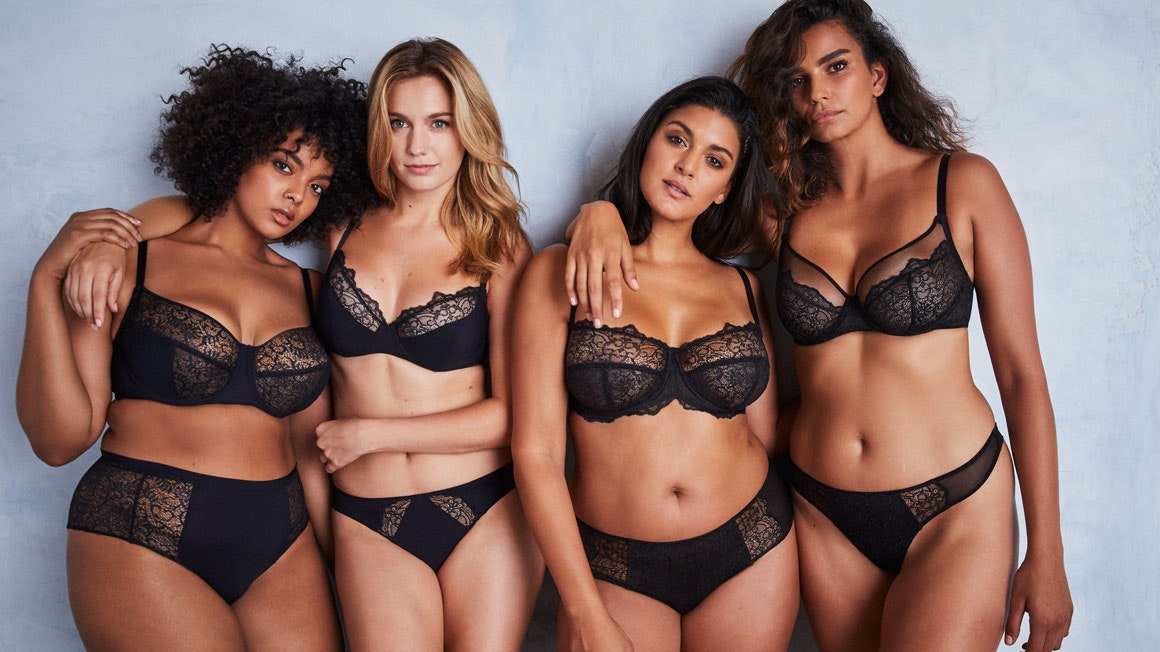 Amber Tolliver has modeled for lingerie brands for 17 years, working with companies like Jockey and Aerie on various underwear campaigns. (She appeared in the latter's first-ever un-retouched #AerieReal ad back in 2014.) In the almost two decades she's spent in the industry, she's vacillated between being considered straight-size and curve. And that made a real difference, both as a consumer and as a model, in what lingerie she was able to wear.

"When I was a straight-size model, I had tons of options in terms of lingerie brands that carried my size," Tolliver says. "But as my body changed and my bust grew, the options grew to be almost nonexistent."

She recalls one instance where she had booked a modeling gig with a store that carries multiple lingerie brands. She was curve at that time and says she immediately noticed a difference between what she would be photographed in versus what the straight-size models were going to wear. "I just remember walking up to one of the racks and [saying,] 'Wow, all of this lingerie is really beautiful—it’s colorful, it’s lacy, it’s feminine.' And they said, 'Yeah, it really is, but that’s not your rack.'" Her rack, she tells Glamour, was pretty much exclusively "black, white, and nude panties and bras that came up to my clavicles. At that point, I was like, This is it—I’m not going to be a bystander."

That experience drove her to launch her own intimates brand, where size doesn't limit what product you have access to. And so Liberté was born.

At Liberté, there aren't any plain old nude undies. Instead the bras have playful mesh and lace accents, the undies have sophisticated panels, and all pieces come in several different colors. The collection feels mature but not matronly; supportive but not overly constructed. The price point is sweet too, ranging from $45 to $130.

From launch, the direct-to-consumer brand has offered an expansive size range, with a special emphasis on products for larger busts. Bras start at 32C and go up to 38H, while panties are available in sizes small to 2X. Tolliver's intention was to offer sizes that shoppers couldn't typically find in stores: Too many brands, she says, promise to expand their sizing without following through, so "it was a part of the brand ethos to let women know that this is who we are out of the gate. You don’t have to wait; you can get your size."

"Aerie allowed me to recognize a very large opportunity in shifting the paradigm that exists within the lingerie market when they launched their Aerie Real campaign; that took off like wildfire," she says. "Knowing that doing something different could also be successful opened the door for me to design and curate a collection that spoke more to myself versus a younger demographic."

Liberté is French for "freedom," and it's a word that has special significance to the brand's founder. "I go to Paris twice a year for this trade show, and I have an unbelievable love of the language, [as well as of] my Haitian roots," Tolliver explains. "Just coming up with the French word, liberté, made sense to me," she says, given the brand's goal to offer shoppers a specific type of personal freedom: "The freedom to love who you are as you are."

Down the line, Liberté hopes to expand into other intimates-adjacent categories, like sleepwear and swim—all of which would be size-inclusive, like its core lingerie. That way, "if your body changes, you don’t need to change your brand," says Tolliver. That's pretty freeing too.